Labor Day weekend.  The unofficial end of summer here in the U.S. Kids go back to school, football returns (and the Steelers have yet another opportunity for that 7th ring), and the intense heat and humidity of summer begin to yield to cooler, tolerable temperatures.

Historically, the end-of-summer holiday also marked the beginning of oyster season for many consumers; this based on the silly  rule of thumb that oysters should only be consumed in months that contain the letter ‘r.’  Because of improved aquaculture techniques like disease resistant oyster seed, oysters can be consumed year round.

My wife and I drove up to Williamsburg for the Labor Day holiday to partake of some local oysters and enjoy the sun and cooler temperatures (left by Hurricane Hermine’s visit on Saturday) on the patio of the Gabriel Archer Tavern as part of the kick-off of Virginia’s newest aquaculture culinary experience — the ‘Wine & Brine Lounge.’

Located on the patio of the Gabriel Archer Tavern at Wessex Hundred (The Williamsburg Winery), the new Wine & Brine Lounge will showcase the diversity of local aquaculture by offering oysters from different waterways throughout the region paired with wines from The Williamsburg Winery (eight to ten wines available by the glass).

Daniel Vogt, oyster gardner and co-founder of Big Island Aquaculture, was on hand shucking his oysters for the inaugural Wine & Brine Lounge weekend. 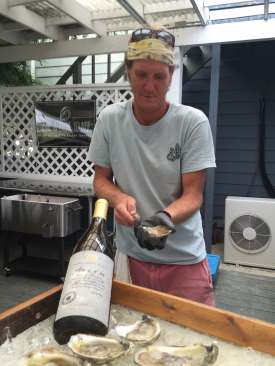 Based in Gloucester, VA, about 25 miles east of The Williamsburg Winery, Big Island Aquaculture was founded by Daniel and his father Bruce Vogt in 1989.  The Vogt’s started cultivating oysters in 2010 and have since earned the reputation of providing some of the best oysters in the region.

Big Island’s oysters are cultivated on Monday Creek, where the York River and Mobjack Bay meet the Chesapeake Bay.  This area is part of region seven — known as the Tidewater Region — on the Virginia Oyster Trail.

Officially launched by Governor Terry Mcauliffe in November 2015, the Virginia Oyster Trail is comprised of eight distinct regions that showcase the diversity of the state’s waterways. 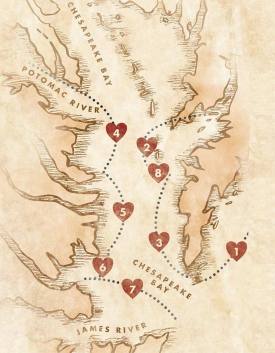 Oysters, as much as any food, express unique flavor characteristics of their marine surroundings — salinity of the water, rainfall, types of algae, and marshes.   Although all oysters cultivated in Virginia waters are the same species — Crassostrea virginica — the salinity, sweetness, creaminess, and texture is different across all regions.

In the waters around Big Island Aquaculture’s beds in Monday Creek, salinity levels can be as high as 30 ppt (compared to a high of 17 ppt in the upper Bay) so the oysters tend to be salty with a nice hint of sweetness.

Big Island Aquaculture oysters are delicious, deep-cupped (from the process known as tumbling), and briny with a hint of sweetness and paired perfectly with a glass of bubbles and Acte 12 Chardonnay. 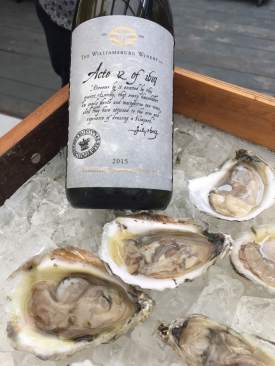 The Wine & Brine Lounge at the Gabriel Archer Tavern will be open every weekend from 11am – 4pm.   A different oyster from around the region will be featured each week and visitors will also have the opportunity to meet the local women and men on the front lines of Virginia’s oyster resurgence.

The Williamsburg Winery is one of a number of Virginia wineries (along with breweries and restaurants, too) supporting local aquaculture by offering oyster and wine pairings.  Other wineries like Chatham Vineyards on Virginia’s Eastern Shore offer epicures similar wine and brine experiences; like the annual ‘Terroir & Merroir Oyster Extravaganza’ on November 12.