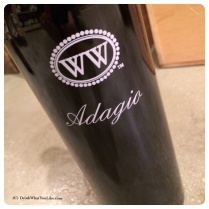 The Governor’s Cup trophy was presented to Patrick Duffeler, Founder and CEO of Williamsburg Winery, and winemaker Matthew Meyer, by Governor Terry McAuliffe this evening during the Governor’s Cup Gala in Richmond. 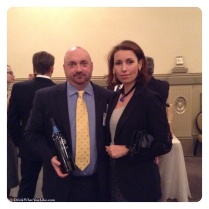 “Winning the Governor’s Cup is recognition for what we are doing here at Williamsburg Winery and an expression of all the hard work that the team here has put in to updating vineyards, machinery and evolving,” Meyer told me during our conversation earlier today. “This win is also recognition that quality, award-winning wines can be produced here in the Tidewater area. We are proud to bring the Cup back to this [Tidewater] region.“

“I didn’t make this wine, we made this wine,” he concluded, referring to the team effort of producing wines at Williamsburg Winery.

The 2014 competition marks the 32nd Virginia Governor’s Cup and the third year of the revamped format under the leadership of head judge Jay Youmans, MW (see my interview with Jay about the new Governor’s Cup competition format, here).

There were 410 different wines entered from 96 Virginia wineries, up from 377 wines from 93 wineries last year.  Twenty gold medals were awarded this year, the same number as last year, up from 13 golds in 2012.

Along with the other 11 highest scored wines in this year’s competition, Adagio will be part of the ‘Virginia Governor’s Case,’ which will be used to showcase and promote Virginia’s top wines to wine media over the next year.

Though a Chardonnay and a dessert wine were among the 12 highest scoring wines that are included in the 2014 Governor’s Case, red Bordeaux-style blends dominated the gold medal category again this year.

While the Veritas 2012 Viognier (one of my personal favorites) did score a Gold medal, wines made from Virginia’s signature state grape, Viognier, were noticeably absent from the Governor’s Case again this year.

Timing of the annual competition and release dates of most white wines continues to be a challenge for white wines placing in the Governor’s Case.

A big congratulations on all the 2014 Virginia Governor’s Cup medalists!