I’m a regular symposium participant in my non-wine, 9-to-5 life, and appreciate the educational opportunity such gatherings of expertise provide.

When my friend Aaron Nix-Gomez author of HogsheadWine.com, and Erin Scala, author of Thinking-Drinking, announced the formation of a wine-themed symposium to report on wine-themed research topics, I welcomed the opportunity to participate.

The process to participate in this symposium is simple: Aaron and Erin present broad wine themes and online wine writers research the topic based on their interpretation, then post findings on a specified date.

Aaron and Erin selected the theme of ‘wine and the sea’ for the inaugural theme, and today is the designated day of posting.

When I think of the sea, in the context of wine, I think almost singularly about oysters. 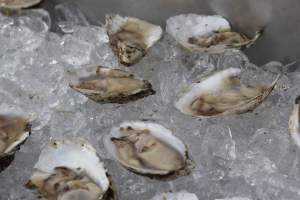 Regular readers know that I am a huge fan of the bivalve.  Specifically, the oyster.  Big fan is actually an understatement.  If ever pressed to name one food that I would never want to give up, oysters would undoubtedly be that food.  If not for joint and cholesterol concerns, I would eat oysters everyday — even in those months without an ‘r’ (referring to a common misperception that oysters should only be enjoyed in those months that include an ‘r’ in the spelling).

Though I believe the intent of the ‘wine and the sea’ theme is to focus more on the history of wine part, participants were encouraged to interpret the theme however we like.  Since I so closely associate oysters with wine – I rarely, if ever, have oysters without wine — and believe that oysters and wine express their place more than any other food or drink, I decided to bend the interpretation limits just a bit and focus more on the history of oysters here in Virginia, with wine as a backdrop.

Oysters have a long history as a food source in Virginia where ‘oysters were consumed during both feast at famine at Jamestown’ and the bivalve ‘takes pride of place in the first description of a New World Christmas.’ [1]

According to Juliana Harding, biologist at the Virginia Institute of Marine Science, the shells from the ‘oysters we shuck today are pretty much like those tossed aside 400 years ago by Jamestown colonists.’ [2] 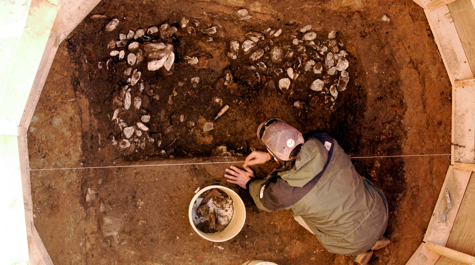 Harding’s comment is supported by recent findings from a study of oyster shells found in an abandoned well in Jamestown that determined that the spent oysters shells dated back to early 17th century. [3]

The age of oysters, like trees, can be determined by analyzing the oyster’s shell layers — or rings.  Oyster shells can also record trends in water temperature and salinity.  Chemical signatures within the oysters shells can also be analyzed to determine age and water salinity while the oyster was still living.  (This subject alone could be the subject of numerous lengthy articles.)

George Percy, one of Captain John Smith’s shipmates and twice the governor of the colony, wrote in his journal in April 1607 of the Chesapeake Bay, “oysters . . . lay on the ground as thick as stones.”  (though Smith is most often credited with this exact quote). [4]

Around this same time, Captain Smith noted in his journal — which would later be published as The Generall Historie of Virginia, New-England, and the Summer Isles — his first reference to wine;  ‘of those hedge grapes [grapes growing wild by rivers] we made neere twentie gallons of wine, which was like our French Brittish wine, but certainely they would proue good were they well manured. There is another sort of grape neere as great as a Cherry, this they call Messamins, they be fatte, and the iuyce thicke. Neither doth the taste so well please when they are made in wine. [5] 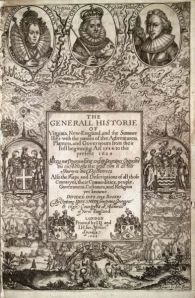 With all of the responsibilities one assumes helping colonize a new land and chronicling such explorations, it seems Captain Smith did not have time or want to fuss with documenting food and wine pairings.  Alas there is no direct connection between oysters and wine pairing from the early settlers that chronicled their experiences (that I could find). 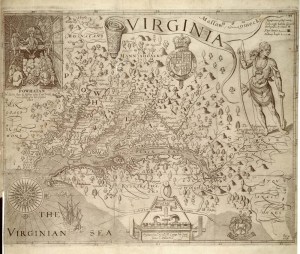 Sadly, the abundance first reported by Percy and Smith is long gone.  By the late 1700s, ‘over harvesting began to tip the oyster ecology out of balance in some areas’ of the bay. [6 ]

Though the oyster population dwindled, oysters continued to serve as an important food source in 18th and 19th century coastal Virginia, and were a staple of several founding fathers.  Thomas Jefferson — third U.S. President, second governor of Virginia, and widely regarded as our nation’s First Oenophile — may have been the first to document oyster and wine pairings.

In his book, Passions: The Wines and Travels of Thomas Jefferson, author James Gabler writes; ‘…on March 14 [1788] he dined alone at the Amsterdam Arms.  He drank a half bottle of Graves wine and ate 50 oysters!  The following night he and a dinner companion consumed another 50 oysters and one and a half bottles of wine.’  [7]

Fast forward a couple hundred years, and oysters are still an important Virginia-grown food.  The commonwealth is home to seven different oyster regions and is the ‘largest producer of fresh, farm-raised oysters in the U.S.  [8] 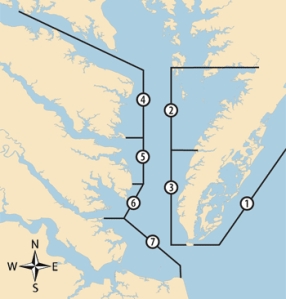 I’m not sure this post fully meets the spirit of the intent of the ‘Wine and the Sea’ theme, but I enjoyed learning more about the history of the oyster writing this piece.  I could spend months researching and writing about the the seemingly infinite subject of wine and oysters – or, wine and the sea.  Alas, the duties of life away from the keyboard beckon.

Thank you Aaron and Erin for a stimulating subject of study and for bringing this coterie together.  I look forward to the next topic (and am more likely to stay on topic).

Wine and the Sea posts from other symposium participants:

8 thoughts on “Wine and the Sea — Consider the Oyster”