Situated 100 miles east of San Francisco, about 40 miles south of Sacremento and just west of the Sierra Nevada mountain range is one of the California’s most historic and noted wine regions  — Lodi.  Home to many 4th and 5th generation winegrowing families that played a role in shaping the California wine industry, Lodi is a region rich with wine history and has been a major winegrowing area for over 150 years.

Since many of the smaller, boutique Lodi producers are not readily available at bottleshops in my area I jumped at the change to participate in a tasting of five reds from notable Lodi producers.

Because of an unforeseen schedule conflict (a good schedule conflict though), my participation in tonight’s Lodi virtual tasting will be limited so we invited a couple friends over last night to taste these wines with us.  I also retasted each wine this afternoon to see how each evolved overnight.

The two Cab-dominant blends were more approachable this afternoon, after being open for a couple hours last night and recorked without gas, while the three Zins showed better last night.  I resealed each of the wines (each less than half-full) with gas to reopen and taste tomorrow, at which point I may update the tasting notes further.

* Each wine provided as sample.

LangeTwins, Centennial Zinfandel 2009
Lodi, California
100% Zinfandel
15.2% abv | $60
Though the LangeTwins winery opened in 2006, the family has deep roots in California winegrowing going back five generations.   I have had wines from LangeTwins many times and have been a fan for quite a while.  This beautiful Cab – which was singing today after being opened last night – solidified my already high opinion of LangeTwins’s wines.  Much to unpack with this wine – starts with notes of big, dark blackberry and cherry along with spice, tobacco leaf and finishes with oak-vanilla and blackberries.  Would like to try this wine again in a few years.

Mettler Family Vineyards, Estate Cabernet Sauvignon 2010
Lodi, California
86% Cabernet, 13% Petite Sirah, 1% Petit Verdot
14.9% abv | $25
Another fifth generation winegrowing family in this lineup – impressive history in Lodi!   Garnet colored in the glass, this wine starts with toasted oak and vanilla aromas followed by dark cherry, rose petals and tobacco leaf.  In the mouth, flavors of vanilla, cherry and blackcurrant (aka cassis fruit, not the syrup) dominate, followed by serious spice rack on the finish.  Consider this for your next red meat on the (charcoal) grill night. 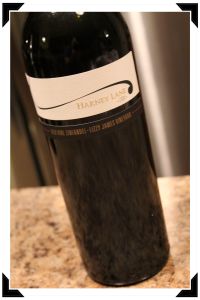 Harney Lane Winery, Lizzy James Old Vine Zinfandel 2011
Lodi, California
100% Zinfandel
15.9% abv | $35
Anyone wanting to taste figs in liquid form, this is the wine.  Loved the pure, absolute fig notes throughout.  Accompanying the fig were notes of mint, currant and cinnamon.  Sweet without being ‘sweet.’  I can see this wine being a popular guest at Thanksgiving paired with a fruit glazed ham.

St. Amant, Marian’s Vineyard Old Vine Zinfandel 2012
Lodi, California
100% Zinfandel
15.1% abv | $24
The grapes used to make this wine come from vines planted in the Mohr-Fry Ranch vineyard in 1901 – a true old vine zin!  First impression, jammy but not over done.  Fresh raspberry notes throughout with herbal notes on the edges.

Klinker Brick Winery, Bricks & Mortar 2011
Lodi, California
60% Cabernet Sauvignon, 30% Petit Sirah, and 10% Zinfandel
15% abv | $30
Had I tasted this wine blind, I would not have guessed 15% alcohol. A well balanced wine that smelled like our aromas from windowsill herb boxes all mingling together in the morning while making coffee.  Flavors of ripe plums, coffee and dark blackberries in the mouth with a notable sweet cherry finish.

The next time you visit the San Francisco/Bay Area, consider eastward travel to Lodi.  To learn more about the wines of Lodi, CA, visit the LoCA information site and download the Lodi Wines app (available in iTunes App Store).

Thank you to the Wines of Lodi, CA and Charles Communications for sharing your wines and for organizing the tasting.

3 thoughts on “Lodi-licious — Exploring the Wines of Lodi, CA”