I’m not a watcher of Mrs. Van Susteren’s show, called On The Record w/ Greta Van Susteren, but happened to watch last night while chatting with a friend over a post-dinner drink at the hotel lounge.  One of the many televisions in the lounge area was tuned to the FOX news channel when the display of a familiar wine bottle caught my attention. 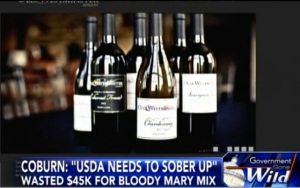 From what I could follow from the on-screen closed caption text, Mrs. Van Susteren was decrying subsidies for wineries as part of a USDA block grant program.

Since I didn’t see the entire segment and wasn’t able to hear, I later found a video clip of the report (in its entirety) on the FOX News site, which confirmed that Mrs. Van Susteren provided supporting commentary regarding a letter that Senator Tom Coburn wrote to U.S. Department of Agriculture Secretary Tom Vilsack, regarding recent spending at the department.

The segment can be viewed in its entirety here.

Senator Coburn, known in some circles as a waste watchdog, wrote to Secretary Vilsack to question the use of USDA grant money to support agricultural enterprises like, gasp!, wineries, while at the same time, threatening to cut food aid funding for 600,000 women and children resulting from the sequester.  (I encourage readers to read Senator Coburn’s entire letter to Secretary Vilsack for additional details and context.)

Last month, the USDA Rural Development also announced it is funding wine related initiatives through the Specialty Crop Block Grant Program, including more than $300,000 to the Mackinaw Trail Winery in Michigan “to facilitate a major expansion of their wine sales and marketing,” $162,500 to the Old Westminster Winery in Maryland (ref. link), $100,000 for the Appleton Creek Winery in New York, $49,900 for marketing and operating costs for processing Nebraska sandhills grapes into wine and selling to local markets, nearly $49,000 for marketing of Fireside Winery in Iowa, and $9,000 to “be used for market and business planning” of another winery in northwest Iowa.

This is not the only USDA program underwriting wine projects.  In the last year, more than 20 wine projects were supported by USDA’s Specialty Crop Block Grant Program, including the Hawaii Food and Wine Festival, the development of a Massachusetts wine trail app for iPhones and other smartphones, and a Wine Pavilion at the South Dakota State Fair.  Since sequestration went in to effect, the program announced awarding $300,000 to the 3 Horse Ranch Vineyards in Idaho, $30,000 to the Sunnyslope Wine Trail Group “to conduct an advertising campaign” and $40,000 to the Idaho Wine Commission “to raise awareness of the state’s wine industry.

I do not share Senator Coburn or Mrs. Van Susteren’s (apparent) outrage over these wine-related subsidies from the USDA.  Admittedly I may be biased.  I should point out that I do not support cutting food aid to those in need for the sake of funding wine promotions.  Like all government agencies, there is likely no shortage of bloat at the USDA and much room for cost cutting.  However, the small grant amounts Senator Coburn referenced in his letter to Secretary Vilsack are not even a rounding error in the USDA’s overall $145 Billion budget (FY 2012).

I am curious to know how these wineries are spending tax dollars granted to them as part of the USDA’s program — vineyard expansion of particular varieties (which ones?), marketing (on what?), staff salaries, new equipment?

I suspect these dollars are being used wisely, in ways that grow not only each individual winery but also in a way that benefits their region.

Of the handful of wineries that received a 2012 Value-Added Producer Grant (awarded on May 1, 2013) or Specialty Crop Block Grant, not one Virginia winery was on the list.  However, several Virginia wineries did land sizable USDA grants last year — Michael Shaps’ Virginia Wine Works ($149,125) in Charlottesville, Rosemont Vineyards & Winery ($300,000) in LaCrosse, The Homeplace Vineyard ($208,571) in Chatham, and the Virginia Wineries Association Cooperative ($100,000).

On the upside, Virginia wasn’t completely shut out of the grant monies this year — MeadowCroft Farm in Swoope, VA received a grant for $300,000 for social media and marketing of pickles and their other produce (I’m not making this up) and Showalter Orchard and Greenhouse received a $300,000 grant to process and market hard cider.  A complete list of FY 2012 Value-Added Producer Grants can be found on the USDA Rural Development site, here.

In the spirit of fairness, Senator Coburn did not limit his questioning to just wine, he also decries the USDA’s funding support of vodka, bloody mary mix, soy beans, pizza and a number of other related agriculture products.

To those wineries that applied for and were awarded these block grants — I say good on ya!

And, to those Virginia wineries not taking advantage of (or at least applying for) the USDA grants to help fund expansion or upgrade — I say get on with it and don’t let your neighbors to the north reap all the benefits.

Should the government be funding wine, pickle, and cider businesses?  What say you?

10 thoughts on “Senator Calls Out USDA For Funding $45,000 Bloody Mary Mix, $300,00 for Social Media Marketing of Pickles, and Winery Subsidies”