Though Thomas Jefferson died in 1826, his legacy lives on in many ways – through the Declaration of Independence, that Revolution thing, the University of Virginia and via a few bottles of late 18th century wine that he allegedly left behind.  Leave it to Jefferson to find himself in the middle of a controversy over 150 years after his death. I should say, ‘yet another’ controversy over 150 years after his death.

At the center of the latest Jefferson controversy – a couple of super wealthy dudes, a wine magazine owning collegiate underachiever, an old guy, an intrepid author, a leading expert in old wines, and a dozen or so bottles of late 18th century wine that allegedly belonged to one Thomas Jefferson.

As most everyone even remotely familiar with the wine industry knows, this story is the subject of Benjamin Wallace’s fascinating and thorough book, The Billionaire’s Vinegar.  Wallace’s book provides a very interesting account of this particular controversy.

In 1985, the wine Gods took a break from shining their light on the first growth vineyards of Bordeaux to bless (*sarcastic font*) wealthy German wine investor Hardy Rodenstock with a case or more of 18th century wines that allegedly belonged to Thomas Jefferson.  Rodenstock never revealed the source of these bottles – all Bordeaux including Chateaux Lafite, Margaux, Mouton, and Chateau d’Yquem.  (Editorial Note:  I’m pausing for an eye roll and deep, doubtful sigh.)

Rodenstock claimed that the bottles were found in an old cellar that was bricked up for protection during the French Revolution. Soon after the bottles were discovered in this secret, undisclosed location, questions began to arise as to their authenticity.  In an October 1985 article in The New York Times, wine journalist Howard Goldberg had questioned their origins saying researchers at Monticello had found NO support in Jefferson’s meticulous records that he had ever ordered, received, or referred to any Bordeaux of 1787, and had received 1784s only from Yquem and Margaux, although he had ordered 1784 Lafite but the owner had had no more available. Monticello researchers also found the initialing “Th.J.” abnormal since Jefferson habitually labeled his personal property with the old style initials “T.I,” and used a colon differently, situated between and above and below the “Th” and the “J” in his abbreviated signatures. (Hailman, 398)

The first bottle from this ‘amazing find’ – a 1787 Chateau Lafite, of course – went on the auction block at Christie’s on December 5, 1985 in London. Borrowing the description from John Hailman (398), ‘As reported in a dramatic story in The New Yorker in a column entitled ‘A Piece of History,’ an unnamed eyewitness of the historic events reported that a standing-room-only crowd attended the auction, recorded by a film crew worthy of the set of a major motion picture. The bottle itself stood on green felt in its own glass case. Seven active bidders, including Wine Spectator publisher Marvin Shanken, bid on the bottle. In the end, Christopher Forbes, son of the late publisher Malcolm Forbes and brother of former presidential candidate Steve Forbes, bough the bottle for what was then a record price of $156,450 (105,000 British pounds sterling). The bidding, which lasted just one minute and 39 seconds, far outdid the previous high price ever paid at auction for any bottle of wine from any source.‘

‘I wish Jefferson had drunk the damn bottle himself and saved me the expense.’ ~ Malcolm Forbes, when asked his opinion after the auction.

Forbes promptly put the bottle on display in the Forbes art gallery on Fifth Avenue in New York, and sadly the lights intended to showcase the wine caused the bottle to warm and the cork to shrink and fall in to the bottle.  What a shame – there’s no telling how long it took for someone to create that bottle.

In another edition of ‘Rich Guys Gone Wild,’ the second bottle – a ‘1784 Chateaux d’Yquem Th.J‘ – from the 18th century Jefferson stash discovered at that secret, undisclosed location, was auctioned by Christie’s in London for a modest $56,628.  The recipient of this bargain bottle was a Jordanian fellow bidding on behalf of Dodi al Fayed (the man who died in the tragic accident with Princess Diana).

In June 1987 another alleged Jefferson bottle from that same secret, undisclosed location was sold.  This time, a half-bottle alleged to be a 1784 Margaux sold for $30,000 to Wine Spectator publisher Marvin Shanken.  Sidebar: One of the more comical items I picked up from reading The Billionaire’s Vinegar – a little gem about Wine Spectator publisher, Marvin Shanken graduating last in his class at the University of Miami.  Shanken is ‘The’ poster child for possibility – proof that one does not need a formal education or looks to be successful.

Just when I think that the story of these alleged Jefferson bottles can’t get better, it does.   I’m fast-forwarding through many fascinating details here for the sake of attention spans, but the Readers Digest version is that famous wine merchant, William Sokolin, got his hands on one of the Jefferson bottles, a 1787 Chateau Margaux.  During a black tie dinner in 1989, Sokolin proceeded to ‘accidentally’ (‘*cynical font*’) bump the bottle against a metal-topped table, breaking a hole in the bottle, losing much of the juice.  Thankfully he had the bottle insured for $212,000.

In The Billionaire’s Vinegar, Wallace does a superb job of providing every detail of this particular episode of misfortune and a detailed account of each player involved.  In particular, Wallace provides a detailed account of the role played by Michael Broadbent – the world-renowned wine expert and former head of Christie’s wine department.  Broadbent was responsible for authenticating the alleged Jefferson bottles as well as the man behind the sale of the wines through Christie’s.  Wallace was not so kind in his depiction of Broadbent, and as one might expect, Broadbent didn’t much like the way he was portrayed in The Billionaire’s Vinegar.

Broadbent chose to settle his gripe like a man – he sued!  Broadbent filed the suit with the High Court of Justice, Queen’s Bench Division, based on his objection to the way was portrayed in several passages of Wallace’s Billionaire’s Vinegar. The Broadbent – Random House (publisher of The Billionaire’s Vinegar) lawsuit was settled in late 2009.

In the spirit of ensuring attorneys continue to stay well fed, another player in this Jefferson drama jumped in with a lawsuit of his own. Collector William Koch – who purchased four of the alleged Jefferson bottles – is currently suing Hardy Rodenstock in US federal court for fraud.  Rodenstock, ever the elusive devil, has plain ‘ol refused to take part in the case. 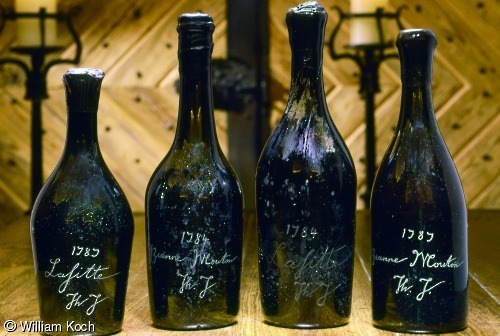 Did these bottles really belong to Thomas Jefferson?  I will never know the absolute truth.  Perhaps none of us will, however, I am going to defer judgment to the expertise of the Jefferson scholars at Monticello.  As Hailman notes, the most thorough and thoughtful study to date, Lucia Cinder Stanton of the Thomas Jefferson Memorial Foundation at Monticello totally doubts the authenticity of the bottles as Jeffersonian.  (Hailman, 402). Notes on Jefferson’s many wine orders reveal NO evidence of the bottles existence.  The end!