‘Immediately after entering the President’s House, Jefferson began an extraordinary series of dinner parties at which wine drinking and talk of wine were major features. Like his contemporary, the devious French minister Talleyrand and his ‘Champagne diplomacy,’ Jefferson tried to warm his guests with fine wines, then used the convivial atmosphere to create better political and diplomatic relations, both with foreign powers and his own domestic friends and foes.’ ~ Hailman, 258

As the ‘30 days of Thomas Jefferson on Wine‘ series is quickly winding down, today’s post will be the final piece on wine in the Jefferson Presidency.  Sadly, today’s post, coupled with the preceding two, barely touches on Jefferson’s wine experiences during his time as President.  I could spend the next year covering the wines Jefferson shared with his guests at the President’s House in the years 1801 to 1809 – amazing times, company, and letters capturing the details of the dinner conversations.

When Jefferson was elected President, he had wine vaults constructed below the east colonnade to store his considerable wine collection.  This area is no longer used for the purpose of storing wine. One could easily argue that the stature of wine in the White House has deteriorated since the age of Jefferson, as there is no ‘official’ White House wine cellar today (but there is a ‘collection’ of about 500 bottles of wine there).

Like most of his letters and notes, Jefferson’s writings on wine during his Presidency make for fascinating reading. If nothing else, I hope these tidbits of Jefferson wine information serve as motivation for a few folks to pick up Hailman’s ‘Thomas Jefferson on Wine’ or check out the Monticello wiki to read about wine in the President’s House (now call The White House).

One of the more diverse wine years during Jefferson’s Presidency was 1803.  Wine Provided at Washington, 1803: 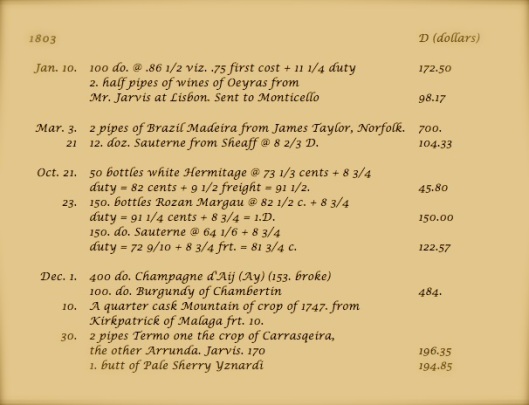 As further proof that no detail was beyond his observation, not only did Jefferson record the wines purchased along with amount paid, he also noted how the wine was packed, shipped, any breakage, how it was shipped and by whom, cost of freight and duties along with the name of the tax collector.

By the end of his Presidency, Jefferson was more than ready to leave the world of politics behind him and retire to ‘his home’ – Monticello.  Before leaving office, Jefferson had shipped most of his remaining wine to Monticello to enjoy during his retirement years, leaving the White House cellar nearly empty.