“In my opinion, when the country is populated in proportion to its size, the best wine in the world will be made here.” ~ Philip Mazzei (Gabler, 6)

Since this series is intended to focus on ‘Thomas Jefferson on Wine’ I will try to stick specifically to the subject, and not ramble too much about TJ’s drinking buddies.  I am deviating slightly from our course by introducing one of the more interesting characters in Jefferson’s life, Philip Mazzei.  Like most posts in this series, this one is by no means an exhaustive treatment of the life of a very complex man.  Instead, this is merely an introduction to someone who played a significant role in Jefferson’s life – politically, personally and with wine.

Philip Mazzei – born in Tuscany in 1730 – was a person of interest, friend of Jefferson, physician, promoter of liberty, spy, raconteur, merchant, and grape grower.  Although Jefferson had many wine acquaintances, few are as colorful and interesting as Philip Mazzei.

Being an ardent proponent of early American liberty, Mazzei was remembered on a US postage airmail stamp in 1980.

I have absolute respect for Mr. Hailman and his expertise as a Jefferson and wine scholar, however I do question this particular point.  Jefferson was a man with a universe of interests with an already well-developed interest in wine, which I’m sure included vineyards and grape growing.  I seriously doubt Philip Mazzei was the initial spark to Jefferson’s desire to plant vineyards, but Mr. Hailman has a couple of decades of research to support his position, so I will resist the temptation to argue this point for the sake of arguing as I’m not able to find any documentation to support the fact that he planted vines somewhere prior to meeting Mazzei. I note this solely for posterity and the potential to say ‘I was right’ at a later date.

In his early years Mazzei practiced Medicine in his native Italy and in the Middle East.  He eventually found his way to England where he was a merchant specializing in silks, olive oil, cheese, and of course wine.  It was in London that Mazzei made the acquaintance of Ben Franklin and fellow revolutionary Thomas Adams, and later leveraged these relationships to gain entry in to their circles back in the American colonies.

After 18 years as a wine merchant in London, Mazzei sailed to Virginia in 1773 with the intent of establishing a wine industry in the Colonies and introducing the colonists to eggs of silk worms to make silk and olive trees. (Gabler, p. 3)  Arriving with Mazzei was his wife-to-be and ten Italian vignerons that much needed skills and hands needed to establish vineyards.

Soon after arriving in Virginia, Mazzei met Jefferson for the first time on his way through Charlottesville en route to his new land in Virginia’s Shenandoah Valley.  This meeting likely changed the course of viticulture in early Virginia – Jefferson gave Mazzei 193 acres of land on the south side of Monticello and Mazzei purchased another 700 acres by 1778 and named his estate Colle (pronounced ‘collie’), that means ‘hill’ in Italian.

The amount of property provided to Mazzei is a point of debate as I’ve read many different acreage numbers ranging from 193 to 400 to 2,000.  (In this case, I am going with the Monticello.org number.)

While waiting for construction of his home to be completed, Mazzei lived with the Jefferson’s at Monticello. Not long after ‘moving in to the neighborhood,’ Italian wines began to appear in Jefferson’s records. (Hailman, p. 48)  The first of which was a flask of wine from Syracuse (likely Muscat), on the island of Sicily, in 1775. One could make the argument that Mazzei introduced Jefferson to the virtues of Italian wine. 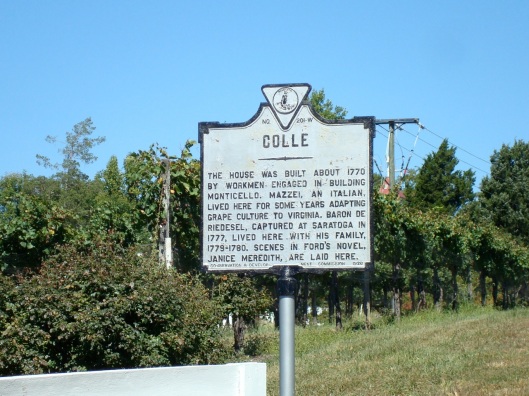 Historical sign at the entrance to Jefferson Vineyards, just south of Jefferson's Monticello.

In the end, despite all of the effort – the work of the Italian vignerons, land from Jefferson, Mazzei’s expertise based on his family’s 400 years of winemaking history in Italy – Mazzei’s vineyards at Colle met a dismal end during the Revolution.  Jefferson explained that Mazzei “had rented his place to General Riedesel, whose horses in one week destroyed the whole labour of three or four years, and thus ended an experiment, which, from every appearance, would in a year or two more have established the practicability of that branch of culture in America.”

Even after Mazzei left Virginia for the last time in 1785, he continued to provide Jefferson with fruit tree and vine plantings.  None of those vines resulted in wine at Monticello.

Mazzei’s Colle still plays a role in the Virginia wine industry today.  The closest winery to Monticello, Jefferson Vineyards, occupies the same land as Mazzei’s estate did two hundred years earlier.  It is said that many of Mazzei’s descendants still live in the Charlottesville area today.

For the conspiracy theorists only:
I sometimes have a conspiratorial streak about me, and I have thought often since beginning this study that Jefferson and Mazzei were more than just wine drinking buddies.  With spying on his resume, I wonder if Mazzei was a spy all along? Mazzei was a jack of many trades, one of which was alleged spy in France for the King of Poland.  This may seem a stretch, but something to consider.

Since this series is supposed to focus on ‘Thomas Jefferson on Wine,’ this post is just a (very) cursory introduction to Philip Mazzei.  In no way could I fully explore and present the life of Mazzei here.  For further study, I would highly recommend the following two books, Mazzei’s account of his life, ‘Memoirs of the Life and Peregrinations of the Florentine Philip Mazzei,’ and ‘Philip Mazzei, Friend of Jefferson’ by Richard Garlick.

I will explore Mazzei’s ‘Wine Company’ that included Jefferson and Washington later in the series.

For history buffs, the story behind ‘the’ infamous letter from Jefferson to Mazzei about the state of political affairs in the Colonies that led to the divide between George Washington and Jefferson makes for interesting reading.